It’s been Too Long since I was able to knit any socks – largely because of the afore-complained-about yarn diet. But also because it felt as though the number of pairs of socks I had was about the right number – or possibly even too many – for one person. But I’m now going to take a stand and say There Is No Such Thing As Too Many Socks.

I’m completely and joyously selfish when it comes to socks – they’re the only thing I knit that I absolutely love wearing and I have done a splurge on not one, not two, but four balls of sockyarn. I don’t even have enough needles to knit them all at once…

I have some Rico Superba Poems in lovely foresty greens and shadows;

(this is already on the needles… 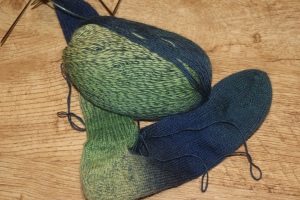 I have some West Yorkshire Spinners in chirpy turquoises and orange, which I’m hoping will knit into one of those clever Fair-Isle-y patterns, 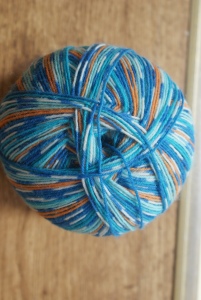 and another in candyfloss bubblegummy pink.

This is very happy to me.

Over the years it has been borne in upon me that when it comes to starting new projects I have no self control at all. New yarn? Cast it on! New idea? Cast it on! Knit on it obsessively for a week! Then do something else new! I have the attention span of a gnat.

Which is why the baby blanket for the baby (who has now arrived and is having to use Other Blankets) is languishing on the needles, with three sides of edging still to go. (I have run out of yarn for this one and on my currently zero income am not buying any more for a bit. It’ll be done before he leaves home.) 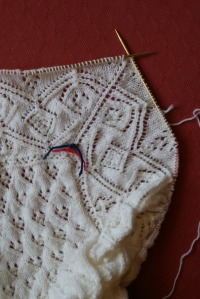 The jacket for the Bear is half done (I have Mary Poppins shouting “Well Begun Is Half Done!” in my head. Not that it’s terribly obvious to me what that actually means, other than Finish The Job.) 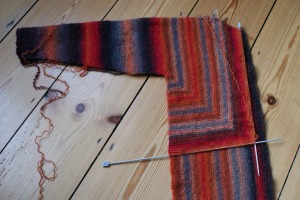 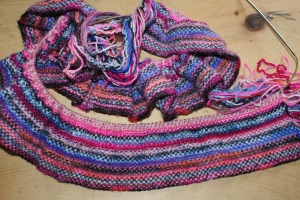 The gansey for me remains a four-inch wonder (though in mitigation I plead that I have lent the circular needle for this to my mother and therefore CAN’T make any progress on it.) When done it will look like this:

And which is why the most obvious thing to do was therefore to cast on another two pairs of socks. (Sockyarn as always from Violet Green – Emerald City – top – and Rushen Coatie.)

I roll my eyes at myself, I really do.

Well, the socks are done – ironically (as I’d busted a move to finish them) their recipients won’t be here to get them, but at least they’re ready!

They’ll look a lot prettier when modelled by their owners, though that might not be for a few weeks. All of which means I can go back to the Bear’s Debbie Bliss hoodie – currently in this state:

I’m altering Debbie’s pattern slightly on the sleeve as I don’t like the look of an additional cable coming in halfway up the sleeve, so I’m just moss-stitching it. I’ve been faithfully following Sharon’s instructions for the shoulder seam, and I’m very pleased with how it looks: 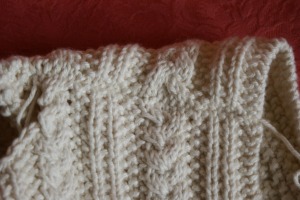 No bump, no bulky seam, just a nice smooth join.

I’m not a knitter who likes to match themselves against the clock. Working life and daily life contain more than enough deadlines to meet or miss, thank you very much. However, I have my self-imposed task of Socks For All this year and as it happens, two of the All will be here this weekend (probably). One pair of socks is done, the other is here:

I have about two inches of leg and a ribbed cuff to knit, and 24 hours to do it in. Time that is minus feeding the baby, cooking for everyone else, laundry, cleaning, dealing with builders, playing with my daughter. Oh, and sleeping.

I think I can…

The trouble with having too many things on the needles – obviously – is that none of them make much progress, so you start getting hacked off with all of them. The glow of excitement you get from starting a new project wears off (oh, that delicious moment when the pattern starts to make sense!) and suddenly there are just Things on Needles all over the house. Until a couple of days ago I practically had a project on the go in every room, which made me feel perpetually guilty. It’s stupid feeling guilty about having several things being knitted at once, but I feel it nonetheless. Maybe it’s to do with having had a religious upbringing. (In a word – Nuns. Though I don’t remember them ever saying anything about committing to one project at a time.)

However – after an evening in front of A Single Man (not an ideal knitting film, because so much of the film’s nuance is visual) I have at least finished a hat for the Bear.

The turnup isn’t really steeper on one side than the other, but it’s hard arranging a hat and then getting her to stand still enough for a picture! It’s just a simple watch cap but I was pleased with how the decreases worked. If anyone wants the pattern I’ll post it.

A pair of pink-and-purple women’s socks is also one bind-off away from completion, and a pair of blue men’s socks is halfway done. Which makes a nice hole in my self-appointed task of socks for eight friends this year.

I have a major socky task ahead of me this year – pairs for eight friends. That’s sixteen socks, with close to 12,000 stitches per sock (generally about 190 rows with 64 or 68 stitches per row). Around 200,000 stitches on socks. That seems like a lot.  However, there’s nothing like a Finished Object to kick things off with. I’m slightly ashamed that this is my first of the year. (I read the Yarn Harlot’s blog and she seems to produce FOs like other people make cups of tea.) So, finished socks. These are a men’s size, knit out of Regia Galaxy. 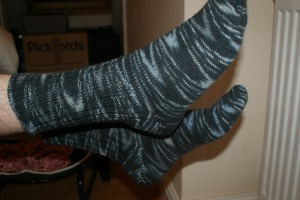 I really love the way the yarn has ‘flashed’ and made these parabolic curves (I guess that’s why it’s called Galaxy…). Definitely buying more of this. Until then – casting on for another two pairs.

As I posted a picture of the kitchen without a back wall (conveniently in the hardest December for 100 years), I thought this time I’d post the progress that’s been made. One set of frozen pipes and a small flood later, I have a door. When I get round to making a garden, it’ll look nice out there. For now it’s enough just that the weather isn’t coming inside the house!

On with the knitting! My sockyarn binge gave me a delicious-looking pile of yarn, but I always hesitate before winding skeins into balls because sometimes a colour scheme looks absolutely scrummy on the skein but not so good as a ball (and sometimes not as good knitted up). These are doing me proud, though. I wound all these during our usual pre-Christmas showing of Gremlins, so they’re going to be forever associated with Mugwai in my head. 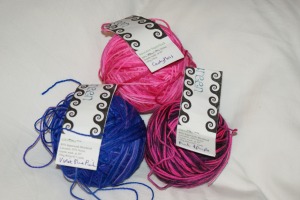 And I also broke one of my own cardinal rules – be faithful to the socks you’re knitting and do not fall into waywardness with seductive new yarn. I slipped from the path of righteousness to knit one sock of my new yarn before finishing Husband’s socks. This yarn looks just as scrumptious knitted up as it did on the skein and in the ball – makes me think of liquorice allsorts. 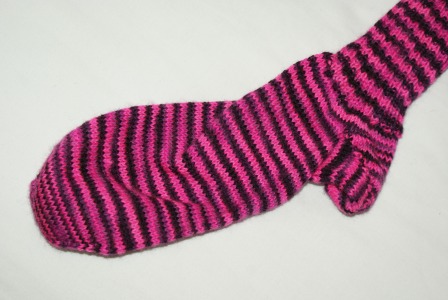 In fact, these socks are a present for someone, so I might get them some liquorice allsorts to go along with them! In the meantime I am back to knitting the Husband’s other sock. 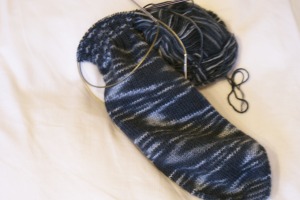 Unfortunately, though, I accidentally cast something on yesterday morning when the baby woke me up…

I’m an Oxford-based mother of three under-8s, which means I have greater familiarity than I ever intended with Ninjago, Transformers and Ninja Turtles.

My favourite things to knit are clothes for the children – because they wear what I tell them – and socks – because handknitted socks are the sockiest socks you will ever own.