Okay, so I had kind of forgotten about this one…  I was having a bit of a tidyup in the freezer (because I store all the woollen hats and scarves and gloves in the freezer during the summer to keep the moth-demons away) and found this lurking at the bottom underneath some pizzas. 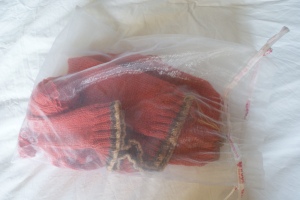 A quick try-on reveals that it is, miraculously, still just about big enough for the child it was originally intended for (though the shirt it was supposed to go over has been outgrown), so I think I’d better pick it back up.

This one has had a troubled history… it was first knitted by a kind grandmother for Boy 1, but then he outgrew it and rather than wait for Boy 2 to grow into it, I thought I’d reknit it as something else for Boy 1. It had been heavily cabled with a pocket on the front, so I was pretty sure that I’d have enough for a plain pattern. I picked Julien by Drops and planned to make it a sleeveless pullover. So I frogged the cabled sweater.

The next problem was that I had no idea what yarn it was, thought it was a 4ply and used needles accordingly. Friends, it was not 4ply. I knitted the whole thing without bothering to check my gauge, and realised extremely belatedly it was far too dense a fabric, and had come up far too small. (It did look nice, though.) 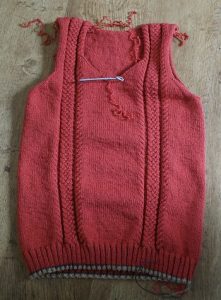 So I sighed, and frogged the sweater – again- and figured out that in fact it was more like a sportweight and would function perfectly adequately with 3.25 needles, so here we are again. Just need to do sleeveless sleeves now.

I’m an Oxford-based mother of three under-11s, which means I have greater familiarity than I ever intended with Ninjago, Transformers and Ninja Turtles.

My favourite things to knit are clothes for the children – because they mostly wear what I tell them – and socks – because handknitted socks are the sockiest socks you will ever own.