The latest Sweater For Me is off the needles. I’m not generally a big fan of sweaters for me, mostly because what I enjoy knitting has very little in common with what suits me/what I enjoy wearing. As an example the finished Heirloom Gansey:

went more or less straight to Knit For Peace because although it was satisfying to do there was no way I was ever going to wear it. (Much as I love Alice Starmore’s books, some of the designs seem to have a rather 80s feel about them. I lived that decade and have no desire to do so again.)

So all in all it’s pretty rare for me to knit a sweater for myself that I like… BUT – the latest top-down creation is Done:

It’s very plain – just a bit of waist shaping – but I really like the detail of the twisted stitches on the raglan sleeve. As I mentioned previously I did at one point have this joining up under the arm and then looping up and over the arm but it didn’t work.

Also, I’m not really clutching feverishly at the hem in the pic, it just looks that way.

The other bit I like a lot is the edging at collar, cuffs and bottom edge.  It took me several goes, faffing about with the sleeves, to get this right. I had a traditional 2×2 rib to start with, but it just looked a bit coarse. 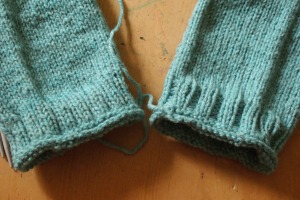 What I ended up with was a 3×1 rib which looks much neater as you can see from the pic. Then there’s a little bit of stocking stitch (3 rows) preceded* by a row of purl, to get the tiny bit of curl on the edge. The purl row acts as a firebreak and stops the stocking stitch simply curling up as far as gravity will allow. I’ve made this mistake before on a colourwork sweater where the stocking-stitch edge curled up to such good effect that mostly what you saw of the colourwork was its backside. The back of this is entirely satisfactory, however. 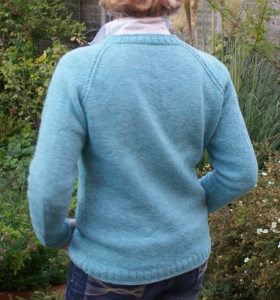 *preceded because it’s top down and therefore knitted out to the edges, rather than starting at the edge/bottom and working up.

I’m an Oxford-based mother of three under-11s, which means I have greater familiarity than I ever intended with Ninjago, Transformers and Ninja Turtles.

My favourite things to knit are clothes for the children – because they mostly wear what I tell them – and socks – because handknitted socks are the sockiest socks you will ever own.